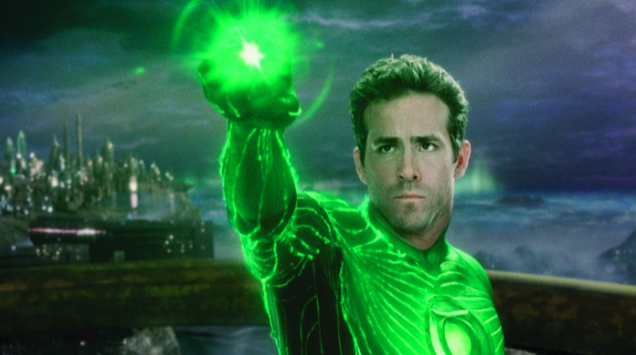 The year is 2011. Thor has just taken $450 million at the box office and the world awaits the final Dark Knight instalment with bated breath. It was the perfect time for another superhero movie to hit cinemas. Sorry, Marty.

With Ryan Reynolds in the titular role and a stellar line up behind the camera, all was primed for success as Warner Bros stepped up for another swing at the burgeoning superhero fan base. Except what followed was certainly no knock out of the park, Green Lantern failed spectacularly by tent-pole movie standards, only just recouping its $200 million budget (which with marketing costs would have delivered a loss). In the following years, The Green Lantern has become somewhat of a Hollywood meme, a warning that even with millions in your pocket, everything can go wrong.

Reynolds has not been shy with his opinion on the failed franchise, bluntly commenting ‘it didn’t work’ and memorably shooting his younger self in the head before he could even read the script during Deadpool 2’s timeline clean up.

While a multitude of factors culminated in the box office Hindenburg of Green Lantern, one of the primary gripes fans have had was the choice to make Reynolds’ super-suit entirely VFX. Again ripped by Deadpool, this time in the first movie:

But what actually happened? This week, Green Lantern Costume Designer, Ngila Dickson, told her side of the story on the Red Carpet Rookies podcast. Like many, I was curious to find out the secret of the Green Lantern suit design given that Dickson is the Oscar-winning creative powerhouse behind The Lord of The Rings trilogy. Something didn’t add up. It seemed so bizarre that with a record like Ngila she would be the originator of the now famously lambasted decision. Unsurprisingly, the real story tells a different tale:

‘It’s a fascinating thing to look at all of the designs that were done for that compared to what ended up on screen…there were some genuinely really great ideas for that show. The politics of it totally overwhelmed it’ — Ngila Dickson

Dickson’s words fit into the widely held criticism that blockbuster film making can be a hotbed of political infighting, with ‘sausage factory’ style production. This is a sentiment acknowledged by Reynolds himself, who commented that The Green Lantern suffered from ‘that typical Hollywood disease’, the key component of which being an aggressive release slate and tight deadlines, often heading into the shoot with an unfinished script. It’s in this atmosphere that obvious issues such as The Green Lantern’s bizarre VFX costume are forced through. Ultimately, the sad result is that the creatives behind the show are left powerless to present the work they intended.

‘I remember being shown the first trailer and saying at the time ‘you’re not putting that in, are you? Because that doesn’t look finished’. And the answer was ‘no, no, no, no, no’. And then the next morning it was out and that was the beginning of the history!’ — Ngila Dickson

So what does this mean for the future of CGI costumes? Well, Ngila thinks they have a bright future:

‘I really think we should because if that had been in the hands of what was originally intended, an absolute A1 top VFX house I think it would have been an entirely different ball game’

With movies such as Ex Machina and Black Panther using VFX costuming so adeptly, it certainly seems that VFX outfits have a positive future in the industry when used right. It’s just a shame that Green Lantern’s version fell victim to exterior forces that altered the product.

The Green Lantern suit debacle stands as a reminder that while a film’s credits list responsibilities in black and white, often the creatives behind the name are powerless to affect what finally ends up on the silver screen and are victims to ‘horse by committee’ management.

Perhaps with a little less haste (and a few notes from the Kevin Feige playbook), the creative crew and ultimately the cinema-going public would have had got the Hal Jordan they deserved. Until they do, I’m happy to enjoy Mr Reynolds’ never-ending path of comedic destruction in its wake.

p.s. If you're interested in costume design, you may enjoy our podcast interview with A Star Is Born Costume Designer, Erin Benach.