Squid Game: How to Write a Blockbuster Script with Social Commentary 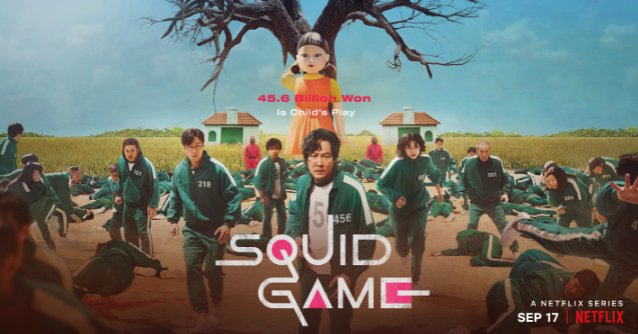 Squid Game could have easily been another generic Netflix series but it didn’t – it became a phenomenon. Why was this?

When a film or TV show goes nuclear there are always other factors at play and with Squid Game, a key one was its infusion of social commentary into the narrative.

In this article, we’ll explore how the writer of Squid Game did it and give you actionable tips you can follow to do the same in your screenwriting.

We meet our protagonist Seong Gi-Hun as he battles rent payments, child support and debt to a gangster in the bowels of an ominous South Korean city. While you may not have a gambling addiction or have been subjected to bathroom threats from knife wielding gangsters, the backdrop of financial troubles in our modern world is something relatively universal.

This backdrop of struggling to make your rent is not only what provides the inciting incident to the series, but aligns viewers with the mission. You might not be Seong Gi-Hun, but feel his pain and want him (and by proxy you) succeed against the crushing pressures of our society.

Choosing a background such as the wealth divide, demonstrates good screenwriting by showing not telling the audience of the issues at hand. A second example of this is Squid Game’s use of…

Taking its name from one of Tarantino’s favorite movies, the Battle Royale genre is layered onto the Squid Game backdrop by writer Hwang Dong-Hyu to further emphasize social commentary.

Each of our protagonists is picked up as they lose the last few coins in their possession and given a potential way out. They are then thrown into a large set of choreographed children’s games in which the penalty for failure is death, but the prize…is financial freedom.

As we know, good filmmaking is the process of showing an audience, not telling them. The choice to use the battle royale genre then, pitting each desperate individual against each other, provides a visual to the allegory of the ‘dog eat dog world’ Hwang is investigating in the social commentary. Furthermore, the carrot given to the game participants of a humongous cash prize visualizes the dreams in their heads. To be specific what Hwang is cleverly doing it EXTERNALIZING CHARACTER DESIRE.

Therefore when you are crafting your script’s incisive social commentary, make sure that you are working out a way to show it visually. Visual allegory as it were.

So we have our backstory and genre helping to demonstrate the social commentary, what can you do next? Well, punch the audience in the face with the problem, frankly.

After the brutal first game our protagonists are subjected to, a little over half of the original participants survived. The others lay in pools of blood across the Red Light, Green Light floor.

A cheeky bait and switch Hwang did here was to offer his characters an out. Having seen the horrors of what they had signed up for the sadistic overlords of the Squid Games offer the participants the choice to democratically vote to leave, which they do (just).

Following this we sit with our protagonist as they leave one hard world (the Squid Game) and swap it for another (their old lives). After brief exposure to their dark and cold old lives, they soon return back to their more colorful and violent, other one.

One might ask whether it would have been better to continue the action of the game and not indulge this plot direction but what Hwang has done here is double down on his social commentary.

The fact that the participants all returned to the game shows just how desperate their situation is. They would rather risk what they now know as a high likely hood of death, rather than risk another day in their old lives. It’s a sad but astute observation of many modern lives.

Hwang shows that just a small chance of freedom is better than what the characters perceive as no chance back in their old lives. Ironically, a game of death and violence is the most hopeful thing in their lives.

Later in the series, we are introduced to a group of masked ‘VIP’’ spectators of the Squid Game. Giving vibes of millionaire sex tourists, these international sadist seekers watch the Squid Games from their ivory tower, pumped with booze and food as the lowly protagonists fight for their lives.

This use of supporting characters again helps the social commentary of the series by highlighting the rich poor divide. While in real life there isn’t a Squid Game to watch there are certainly multi-millionaires watching on as people in their community often struggle to survive.

Squid Game’s literalization of the rich poor divide does come across as a little over the top. Another example which provides a more relatable reference is Ricky Gervais’ outburst at the end of Extras Series 2. In this series the grounds for social commentary is the contemporary obsession with fame. Ricky’s character Andy Millman calls out talent shows like American Idol, The Voice, Britain’s Got Talent etc arguing they are modern day freak shows where the wealthy prey on (and laugh at) desperate hopefuls.

The women of Squid Game have it considerably worse than their male counterparts in the game. We see this exhibit itself early on when there is a riot in their communal bedroom and the entire space descends into violence. We witness how they are passed over in games because they are perceived as weak. Notably, we witness Han Mi-nyeo tie herself to a gangster just to ensure her setup in the game.

Discrimination can almost be tied to the automatic reaction of humans in life-or-death situations. It is a terrible side of society that either exhibits itself openly or is subliminal in some parts. One thing the writer does well is to ignore the more obvious discrimination like Xenophobia. Ali's character is  Indian and with Racism being a hot-button issue in the world at the moment, you wouldn't blame the writers if they had been tempted to ply that route.

However, they didn't and it worked in their favor. Instead, they dealt with the more unspoken discriminations that are rampant within society.

Take what you’ve learnt and analyze your script. Are you presenting a visual way to give social commentary? Have you chosen a backdrop that can interweave your social allegory?

Squid Game is a great role model for the writer with a message to spread because it managed to be a blockbuster series that STILL managed to keep its social commentary. Often in screenwriting you have to face Studio Execs and other briefcase wielders that will often want to err on the side of caution when it comes to social commentary.

Use Squid Game as a North Star to aim for and see where your project ends up!

If you enjoyed this article and wanted to continue to learn about how to write blockbuster scripts, there's no place better than our podcast episode with Captain Marvel writer, Meg LeFauve. In it we specifically discuss how to tease deeper themes out of a comic book smash and more. Hopefully see you there!