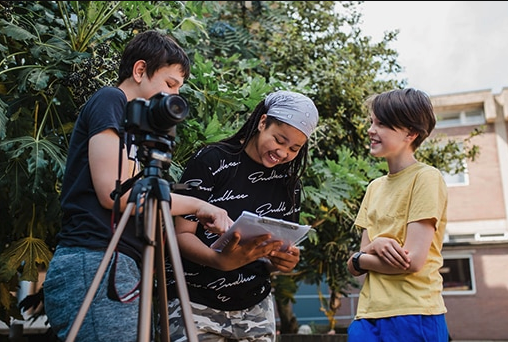 For aspiring filmmakers out there, choosing the right film school is a major step towards the goal of becoming a successful professional in the industry.

The search for the right place to deepen your knowledge in Film & Television production can be a bit overwhelming, though. But, don’t worry, we’re here to help!

We’ve made a selection of the best film schools in the UK, talking about characteristics regarding structure, facilities, equipment available for students and tuition. All of this in order to provide some guidance for future filmmakers that wish to narrow their options a bit.

So, no more stalling, let’s get right into it!

The London Film School is arguably the most traditional film school of England and has been around since 1956. They offer a wide range of courses, all of them ministrated by extremely capable and experienced teachers.

In LFS, you can do anything from a small scriptwriting workshop to obtaining your own PhD in Film by Practice, through a doctoral programme with the University of Exeter.

Some of the main facilities of the school that you’re free to relish as a student are:

And of course, to keep up with such top of the line facilities like these, you gotta have some quality equipment to offer to your students, making sure they make the best films possible with an awesome combination of material and location. Some of the equipment provided by LFS include:

And if you wish to further verify the school’s excellence, then, well, just take a look at some of the notable alumni that LFS had the pleasure of taking in:

● Danny Huston (notable Actor known for his roles in the films Children of Men, The Aviator, 21 Grams)

Tuition in the school can reach £59,883 if you’re interested in taking a 2-year MA Filmmaking programme, for example. The 1-year MA Screenwriting programme would cost you about £14,628,00. However, at more accessible prices, the school often offers 1-day online workshops for fees that can start at £50,00.

The LFA is a film school with 20 years of tradition on their belt. They’re widely known for offering a very vast, multi-disciplinary approach to the teaching of filmmaking.

They offer specialized courses in areas like Directing, Screenwriting, Producing, Cinematography and Sound & Music. Of course, you can always choose to take a more specific approach to one of these departments of filmmaking, or pick a more broad course option that will provide knowledge about all these areas combined.

Their facilities are extremely advanced, counting with the latest equipment and softwares. Some of them include:

LFA always tries to acknowledge (and put to use) the importance of practical activities when it comes to learning filmmaking, and that’s why they’re so well-developed in the area. Their practical classes tend to be the ones more complimented by former students.

Of course, to maintain such a high level of practical teaching, they gotta have the material to back it up. Some of the equipment the school provides to their students include:

- Egripment Slider and flatbed dolly along

As we’ve said, LFA offers a great number of courses, like undergraduates, postgraduates or shorts courses. So, naturally tuition can vary widely. They have 1-day Production Management courses that you can enter for £160,00, but at the same time, you have a 2-year BA Filmmaking course that will cost you £42,000.

It’s really up to you to analyze the options and figure out what it’s best for you (and fits your budget).

The MFS has been giving film lessons since 2003. The school has a major space for its students to transit in and explore and it’s famous for having both the London Ealing and London Garden studios at their disposal, both of which have highly-advanced facilities.

Some of the main facilities you can find and take advantage of in the school studios are:

● Theatre 1: a room made specifically for giving the final editing touches in your film

The equipment offered by MFS for students to develop their projects is also extensive, including:

To further appeal to some of the school's charms, it’s important to mention some of the productions which shooting took place in the London Ealing studios headquarters, such as, in the film industry: Ladykillers, Doctor strange, and Murder on the Orient Express. And in the TV industry: shows like Downton Abbey and Black Mirror.

As the catalog of courses the school provides is really extensive, there’s also a big variation on tuition. 2-day Young Filmmakers workshops can cost about £495,00 to participate. An 1-year MA Directing course costs around £22,000. And a longer (and wider) course such as the 2-year BA in Practical Filmmaking will set you back £48,000.

The NFTS is based in Beaconsfield, 90 minutes outside central London. However, they have several locations spread across the UK, in places such as Leeds, London, Scotland and Cymru Wales.

Opened in 1971, on a combined effort between the UK government and major figures of the industry itself, the school’s intention remains the same to this day: to properly educate and train talent for the British film industry.

The school offers more than 30 types of MA, diploma and certificate courses, as well as several short online and in-person courses. Main master courses included in the school’s catalog include the areas of: Directing, Editing, Cinematography, Producing, Screenwriting, Sound Design, Composing and many more.

Some of the main facilities you can find and take advantage of in a 24/7, 364 days a years-basis in the NFTS headquarters are:

And some of the equipment that goes along with these amazing facilities are:

The kind of dedication that the school puts into forming its students alongside the great quantity of top-quality material and facilities at their disposal was the very thing that enabled the formation of some really outstanding alumni, such as:

● Roger Deakins (two-time Oscar-winning Cinematographer responsible for the cinematography of the films: No Country for Old Men, Blade Runner 2049, 1917 and many more)

As you probably figured out for yourself by reading the article, formal filmmaking education in the UK isn’t cheap. You’d have to be in a very good position financially or get a great scholarship in order to be able to comfortably afford a long-term tuition.

So, thinking about these people that wouldn’t be able to afford this kind of high end education, we separated some Masterclass options that would certainly fulfill a lot of needs for aspiring filmmakers that wish to learn more about this world.

All the masterclasses are very complete and thorough, divided in multiple sections of subject and really diving into the core of the creative process of the person giving the lessons.

How about getting some exclusive advice and guidance from people responsible for creating films like Taxi Driver, The Social Network and Mulholland Drive? Doesn’t sound so bad, huh?

To get an annual membership to Masterclass, you have to pay a fee of U$180,00. This membership will offer you access to 100+ classes and categories, audio-only classes, as well as the option of downloading the classes and watching them offline. You can watch the classes on your TV, desktop or mobile device and new classes are added every month, with subjects regarding not only Film, but also teaching Music, Comedy, Photography, and more.

The debate over whether to apply to film school is unlikely to end anytime soon but hopefully you now understand the lay of the land. If you're looking to hear what one of the best Cinematographer's in the world thinks of film school, you can check out our podcast interview with Social Network and Fight Club legend, Jeff Cronenweth!