What is a Film Producer? Skills, Salary, Responsibilities 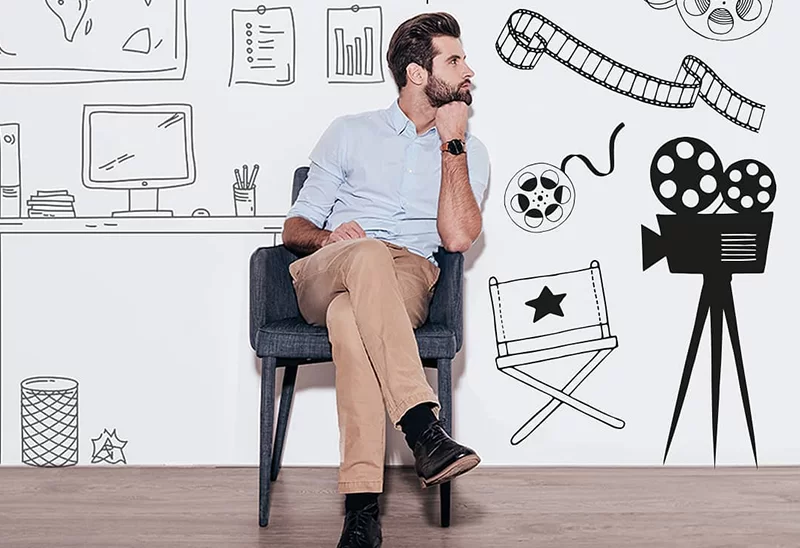 There are some pretty common doubts people can have through the course of their lives. I remember watching the Oscars when I was young and waiting until the end to see which movie would get the Best Picture award.

I was no movie expert but I had a basic idea about what each category actually did and why they got their awards. Best Actor goes to the guy that achieved the best acting, Best Screenplay goes to the screenwriter that wrote the best script; I mean, it was just logical thinking. Until it was time for the Best Picture award, which went to the… Producers?

I mean, getting to be in the position that actually gets to receive the biggest award of the evening, that really has to mean something. People doing this job must be the masterminds behind it all, getting all the important things done, etc. But… What things, exactly? I just remember thinking to myself at that moment: What does a film producer do?

What Is a Film Producer?

The producer is, at heart, an efficient multitasker. He’s actively involved in every single stage of a film’s development: pre-production, production and post-production.

The job consists of hiring key members of the film’s creative team (including writers and directors), heavy overseeing of those key members at their functions, arranging financing, distributing such financing according to each department's needs, approving or disapproving extra costs, etc.

It’s a lot of stuff, and that’s why you’ll rarely see only one producer for a film. There are usually at least 3 producers working on a mid-size feature film.

However, some types of producers are relieved of some responsibilities and others tend to spend extra time on specific ones. We’ll talk about that in a sec.

What Are the Film Producer’s Skills?

A big portion of film producers start their way up the film and TV industry working in different occupations. Many of them start out as actors, directors, writers or even production assistants.

The practical knowledge you can obtain from working on a couple of different functions that are available on a film set is extremely important in order to pursue a position as a producer.

A degree or specialization in the business or filmmaking areas could help too, but are certainly not necessary.  The important thing is that, through one way or the other, a producer has a gained a specific set of skills throughout time that include:

A producer has to have a little bit of a director and writer in them. Because, that way, they can identify who the great directors and writers really are. And which one, among many others, would be a good match for a particular project they have an interest in developing.

● General knowledge of the filmmaking process

Producers must be acquainted with the basics of every key position of a film’s creative team. They have to know this in order to properly oversee the progress of each of these functions and visualize how they could be improved, if necessary.

Being a producer means to be an authoritative figure for essentially everyone working on a film. That means you have no choice but to be a good leader: Incisive, intelligent, with good communication and listening skills, and a firm decision making process. People will have to listen to you, but you also have to constantly show them why they should.

Knowing how to handle the money is key. The producer will have to approve (or disapprove) the budget for requests made by many different sectors of the film crew. They must always be aware of how much is being spent and for what, as well as how much could still be spent, making sure everyone is staying within the available budget.

A producer also has to make sure that the film is commercially successful. And in order to do that, they must be aware of the cultural and social context in which the movie will be released (and how to take advantage of that through the marketing of the film), set up a good non-competitive date for the film’s release, and, in some cases, request alterations to the final cut of the movie.

What Are the Film Producer’s Responsibilities?

● Get the project financed. The producer assembles a creative team - preferably with a finished script, a director of choice, and a relevant actor interested in a role - and goes on to pitch the storyline and creative vision of the project to possible investors, like studios and production companies.

● Location scouting and approving. Producers must visit possible filming locations before production begins, so they can evaluate the logic and the costs of filming in each specific place. All filming locations must be approved by the producer.

● Plan the shooting schedule. A schedule that matches the time and money available for the filming of the project must be done, also remembering to follow location logistics, actors’ availability and other variables.

● Hiring and overseeing key members of the team. On many occasions, the producer will trust the director to make the right choice when selecting top positions, like the director of photography, editor, costume designer, etc. However, the producer is the one responsible for actually hiring these people and also making sure their pay rates stay within the budget.

● Overseeing marketing and distribution. Working to make sure people know when your movie’s coming out and what’s it about, as well as putting an effort so it can get exhibited in as many theaters as possible.

We said earlier that the distribution of functions can get quite segmented in the producing world. That comes from a necessity for more than one type of producer, in order for the  position not to get too saturated. The most common types are:

They’re directly involved with the production’s schedule and budget, making sure everything is being achieved in time and within the budget, by coordinating the shooting schedules, and, well, doing some basic math now and then.

Work mostly on set, but are also active during pre and post production. They tend to work very close to the project’s director, offering creative insight from time to time. They’re usually responsible for hiring and supervising the work of key team members, and occasionally overseeing financial matters.

Those are the money people. They’re typically the ones that contribute financially to the project. They can also assist in the movie’s distribution process, and any legal issues that may come up.

Remember when we said producers had to be writers and directors at heart? That definitely applies more significantly to the creative producer. They work extra close to the project’s director and are responsible for supervising any changes on the script, communicating director’s notes to members of the crew and staff, and supervising crew behavior to assure the director’s creative vision is being properly contemplated.

First of all, there are some variables that can directly influence the salary you could get as a working producer. They include:

● Performance of the movies you produced in the box office

● How many movies you produced within a year period

● How many years of experience you have in the business

● Awards received by the film

RCR Podcast to the Rescue

And to your luck, the Red Carpet Rookies podcast had the pleasure of receiving, in our 9th episode, the Hollywood film producer Julie Lynn, responsible for producing films like Terminator: Dark Fate, Life and Albert Nobbs.

Julie’s story is quite interesting. She actually started her career as a lawyer, working at the Center for the Protection of Free Expression, and eventually ended up in the movie world, a subject that always seemed to fascinate her somehow.

In our chat with her, she demonstrated to be quite aware of the confusion that the producer title can inflict on people. “It can be confusing to me too”, she says, before providing an explanation of what exactly it is that she does during the development of a film. You can check out this part of her interview below:

Terminator Producer Explains What A Film Producer ACTUALLY Does

On a Ending Note…

The producing part of a film is essentially the backbone of it. And the fact that some people may end up never knowing what producing actually means will definitely not change this.

It’s also a position that requires a person that has a know-how that certainly couldn’t be obtained only with theoretical knowledge. Producers are often people that roam through movie sets for years, acquiring important experience and relationships before making their move to a top position.

And it happens as it should, because producing isn’t really a thing that you can start doing without any prior experience in the movie making world. You have to make sure that you have a solid network of important contacts before making a movie, so you can know just who you should call in a moment of need, when your efforts alone won’t be enough. And there’ll be tons of moments like it.