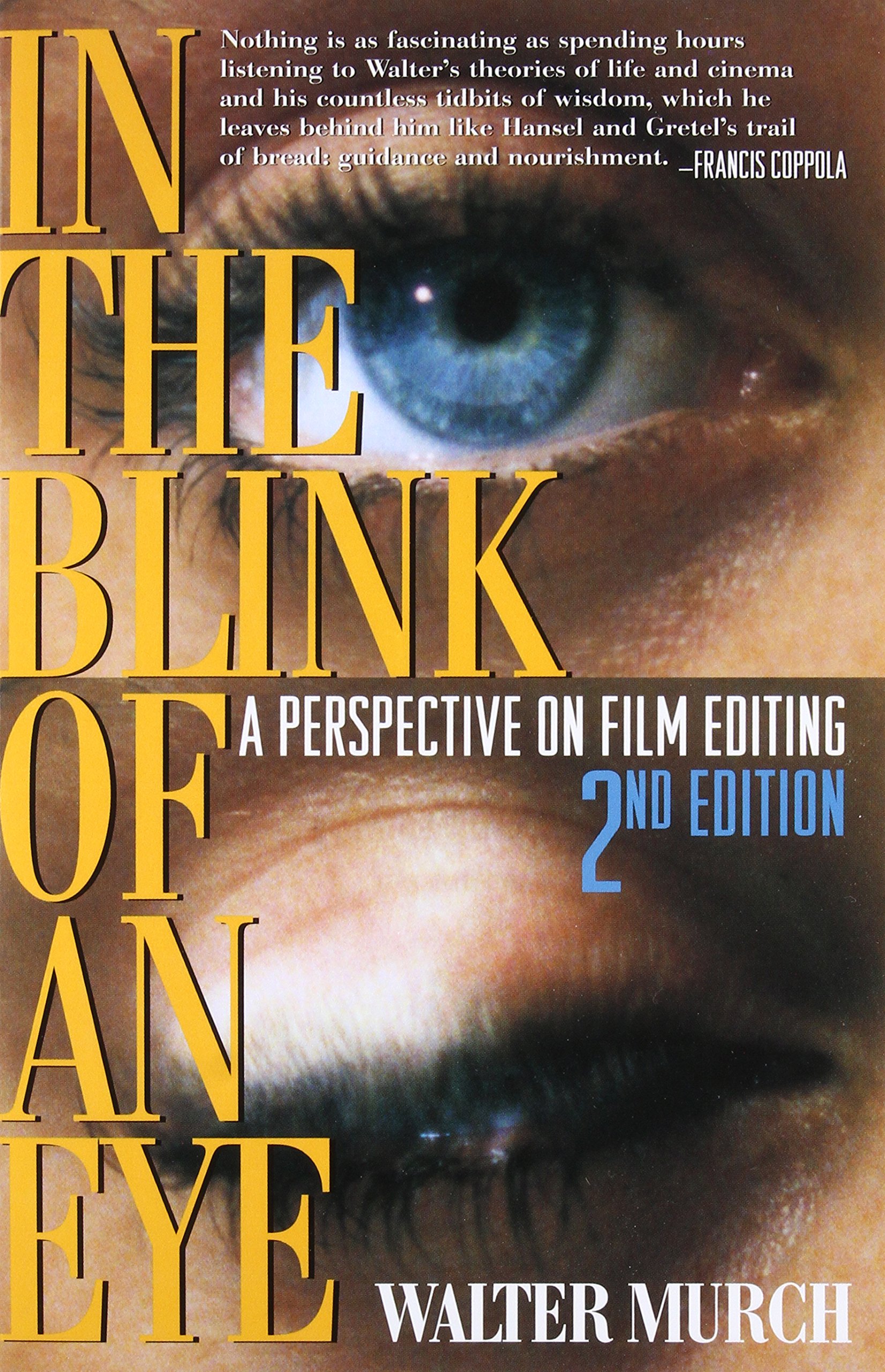 In the Blink of an Eye by Walter Murch - Book Summary, Lessons and Quotes

Based on a lecture from 1988, In the Blink of An Eye distills triple Oscar-winning film editor, Walter Murch’s, philosophies on the craft into a short, easy to read, manual.

In any conversation, as your navigate different thoughts in your head, you blink naturally at the appropriate places in the discussion. Film editors should imagine each scene as a conversation where every cut mimics ‘the blink of an eye’, forming natural pauses in the interaction. A great film editor understands each movie’s unique conversational rhythm and uses it as a road map for their editing approach.

🤔 Who Should Read It?

They say a film is written three times: during the script, the shoot and the edit. For one to understand the entire filmmaking process, you need to understand each.

Therefore, In The Blink Of An Eye should be read by anyone who wants to make, or indeed, analyze film and television. While it’s technically a book on editing, Murch’s lessons are relevant to budding Directors, Producers, Writers and more.

It would also be of interest to anyone keen on film history, as a large amount of the book is devoted to the movement from film to digital and its affects on the craft. This latter part of the book is potentially ‘skippable’ though, for anyone specifically looking for lessons on filmmaking.

'Always try to do the most with the least’

‘What they finally remember is not the editing, not the camerawork, not the performances, not even the story - it’s how they felt’

🎞️ Why Do Cuts Exist?

Though it’s hard to imagine now, when movies were first made at the beginning of the 20th century, cuts had not yet been ‘discovered’ as a part of the filmmaker’s toolkit. When people realised they could splice together two separate images discontinuously and the audience could still comprehend what was happening, ‘films were no longer earthbound’ as Murch puts it.

This change allowed filmmakers to harness different angles and create ‘cumulatively greater impact’ within each moment of the film. Likened by Murch to Frankenstein’s Monster, cuts not only pull pieces together, but what they create is greater than the sum of its parts. The cuts give the story its soul.

On first glance, it may be surprising that the idea of jumping between two separate pieces of film would be pleasing to watch for our brain. Murch writes that while people often believe they experience the world continuously, they are in fact experiencing cuts with each blink of their eyes.

Murch’s theory on why humans accept the cut of a movie so naturally is that it mimics our dreams. In the dream state, random combinations of images are juxtaposed next to each other and we are conditioned to accept this form of information transferral. Therefore, editing a movie is essentially finding the rhythm of thought.

In a conversation for example, blinks fall naturally at specific moments. Sometimes it’s a longer period, others a short one. People blink when they understand what you are saying and film editing is no different. Much like the conversation, the rhythm must be found and this will dictate whether to hold a shot or cut sharply. When we understand it as an audience, we can blink (i.e. cut).

Murch often found that when he would go to cut an actor, each time the right cut fell when the actor was blinking. He recalls editing Gene Hackman and believing that he fully in habited the character as each blink was perfect for the rhythm of the movie and therefore the edit.

Likewise the inverse metaphor works. If in a conversation with someone blinking at unnatural intervals, the discussion will feel off and stilted. The same goes for a poor edit.

👌 What Makes The Ideal Cut?

- It’s true to the emotion of the moment

- It advances the story

- It occurs at a moment that is rhythmically interesting and “right”

- It acknowledges what you might call “eye-trace”—the concern with the location and movement of the audience’s focus of interest within the frame.

- It respects “planarity”—the grammar of three dimensions transposed by photography to two (the questions of stage-line, etc

- It respects the three-dimensional continuity of the actual space (where people are in the room and in relation to one another).

One key lesson of In The Blink of An Eye is not to overdo it with your editing. As Murch writes:

Great editing is about analysing what is right for the moment, not subscribing to the current Hollywood standard of cuts per second. One must resist the urge to cut for cuttings sake. Much like a well place camera movement, it must be motivated.

Whatever you and your crew think of the movie, ultimately it’s fate will be decided by the people. Too often editors and filmmakers in general (writers I’m looking at you) have a tendency to over explain what’s happening to the audience, not leaving enough room to work it out for themselves. To avoid this in your edit, Murch advocates being the right kind of guide:

’An overactive editor, who changes shots too frequently, is like a tour guide who can’t stop pointing things out: “And up there we have the Sistine Ceiling, and over here we have the Mona Lisa, and, by the way, look at these floor tiles . . .’’. If you are on a tour, you do want the guide to point things out for you, of course, but some of the time you just want to walk around and see what you see. If the guide—that is to say, the editor—doesn’t have the confidence to let people themselves occasionally choose what they want to look at, or to leave things to their imagination, then he is pursuing a goal (complete control) that in the end is self-defeating’

In The Blink of an Eye makes it clear you need to imagine yourself in that cinema seat, popcorn in hand. What would the audience be thinking in each moment? What should they be feeling here?

You can then apply this to your edit. Perhaps in that moment they should be feeling angry but it’s not working…but a cut to a close up could fix that!

🖼️ Seeing Around The Frame

The editor is one of the few people on a production who doesn’t know how it played out on the shoot. They have no concept of the difficulty that it took to get that shot up a mountain, or how cold the crew were that day. In other words, as Murch describes it, they have no knowledge of what was beyond the frame you see on the screen.

Due to this, their opinion is powerful and useful as for examples, the director, will often remember it differently. They ‘see’ what they saw on the day. The mountain vista. The sunset in the distance. But in reality this wasn’t all captured. This gives the editor freedom as they are don’t feel that certain shots must go into due to the difficulty or cost of the image, merely what is creatively useful and interesting.

In the early days of the edit, Murch writes that he can ‘see himself’ in each of the cuts. After the first cut is assembled and you watch it back, the editor can still too vividly remember each cut and why they made it. They are analysing their specific work and not the overall film.

As more full versions are cut and screened you slowly start to see the film for what it is, removing yourself from the work. Ultimately, Murch believes you get to a point where ‘the shots themselves seem to create each other’. Each shot leads into the next fluidly and you are the invisible string puller.

’This process reaches the point where I can look at the scene and say, I didn’t have anything to do with that—it just created itself’

🗒️ Always Have A Plan

Largely due to the ‘astronomical’ amount of possible versions an editor has to deal with, one must always have a plan. Likened by Murch to going into the Amazon rainforest, you wouldn’t just go hacking in with your machete first would you? You would study the map, get a feel for the terrain and go in with the plan in mind.

The book itself gets into specific formulas that can be used to work out the total number of combinations but to keep it short in this summary for you…it’s MASSIVE.

So get your plan in order, or you might just get stuck in the rainforest.

Murch discusses different Directors and their opinion on early screening of their work, stating that some were very against it and others, such as his collaborator and filmmaking legend, Francis Ford Coppola, were strongly in support of feedback in this manner.

The key takeaway from In The Blink of an Eye regarding audience feedback from screenings is to listen to the emotions of the audience, but not necessarily the specific feedback. Audiences are excellent at picking up when there is something not right, but they can’t necessarily put their finger on it. Therefore if you went back into the edit and tried to implement the changes the audience wrote down you would be potentially causing more problems than you solve demonstrated from Murch’s quote below:

‘When you go to a doctor and tell him that you have a pain in your elbow, it is the quack who takes out his scalpel and starts to operate on the elbow. Then you wind up with not only the original pain but probably a pain in your wrist and your shoulder as well. Whereas an experienced doctor studies you, takes an xray, and determines that the cause of the pain is probably a pinched nerve up in your shoulder—you just happen to feel it in your elbow. The pain in the shoulder has been “referred” to the elbow. Audience reactions are like that’

📹 Digital Vs Film - What Editors Can Learn

Originally published in 1992, a decent portion of the In the Blink of An Eye text is devoted to Murch’s opinion on film vs digital and his literal process for working on different film cutting machines.

So not to extend this summary, I won’t get into the details of these chapters other than to list briefly, a few key thoughts of Walter on the matter.

One key idea for editors to take on board was that Editors must learn to think not just horizontally as they did with film, but vertically. With digital editing, the Editor becomes more involved in the other tracks, like music, SFX etc and thinking vertically helps navigate this shift.

Murch believe that film will become a ‘historical curiosity’ which hasn’t quite happened yet as a few film makers still use it, for example Christopher Nolan, but he is certainly in the minority.

The most useful take on the proliferation of digital Editing technology and footage for aspiring Editors is to be aware that now most people can get access to editing software, you will need to work hard to stand out in the noise. To quote Murch:

‘All of us today are able to walk into an art store and buy inexpensive pigments and supplies that the Renaissance painters would have paid fortunes for. And yet, do any of us paint on their level today?’

Digital editing makes things more flexible which is good but also creates problems. People can make decisions much later in the production process, where previously they would have been locked it. Obviously, this could be the right creative decision, but editor should know late changes may come!

🤔 What To Learn Next?

I hope this summary of In the Blink of Eye was helpful to you! If you’re interested in learning more about film editing, check out our podcast interview with Oscar nominated District 9, Handmaid’s Tale and Deadpool Editor, Julian Clarke here.