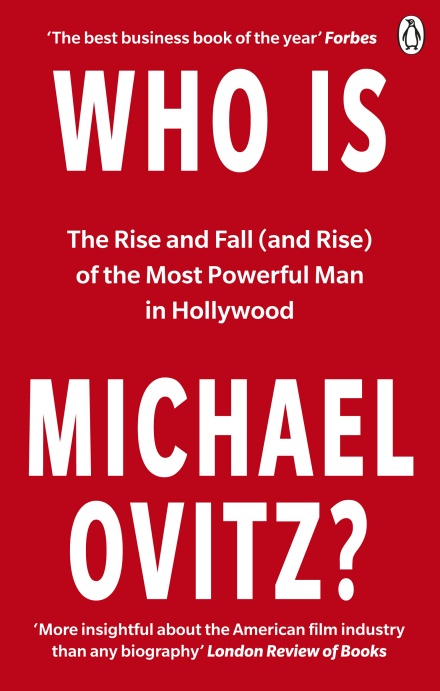 Known as ‘the most powerful man in Hollywood’, legendary movie agent and founder of the Creative Artists Agency (CAA), Mike Ovitz, imparts a lifetime of lessons on Hollywood, creativity and business.

In the form of a memoir, Mike Ovitz goes through each stage of his life telling stories and lessons learned along the way. You’ll learn everything from what it’s like to work with Dustin Hoffman and Sean Connery, to how to package a movie, sell a film studio and even advise billion dollar silicon valley companies.

🤔 Who Should Read It?

Who is Michael Ovitz has something for everyone. Whether you are keen on a career in Hollywood movie making or silicon valley tech or just a fan of a jaw-dropping anecdote this book has got it. Even for those not in those specific industries, Who is Michael Ovitz provides valuable life lessons on life and business from a man behind a multi million dollar company and many of the world’s most loves pieces of culture.

‘Hollywood has always been a ruthless business’

‘It’s only blarney if you can’t make it happen’

👁️ Perception is Everything

Ovitz makes clear the importance of perception. CAA agents were taught to ‘reach for the club’ everyday but never use it, feigning an image of strength and power.

“Power is only power until you expect it. It’s all perception”

Ovitz cultivated an image of being a ‘spectre’, a fearsome figure that ruled over Hollywood, while in reality, at home, he was ‘ultra sensitive’.

Likewise, one’s personal perception can be adjusted for career gain, not just the company’s. Ovitz writes that you need to pick a ‘persona’, that you can ‘inhabit without strain’. Michael’s was the ‘I’ll fix your problems guy’ mixed with the ‘I’ll make your dreams come true guy’.

🪞 Use Image to Your Advantage

One of the recurring strategies used by Ovitz and CAA was image. From buying Armani suits for his staff to littering bright red, CAA covered scripts across Los Angeles, Ovitz used every trick in the book to pose the agency as a powerhouse.

In the early days, when they had no money, he even used the little cash they had to hire a selection of Jaguar cars to take clients to a meal. CAA certainly faked it until they made it, which in Hollywood, appears to be par for the course.

In the same way they ultimately began to package their films, Ovitz and CAA packaged their workers, crafting an image that would sell.

Unsurprisingly, to make it in Hollywood, as with anywhere in life, you need to believe in yourself.

In the film business, Ovitz writes that each film project lives and dies on the belief in it. If you lose one key champion, e.g. the original director, the house of cards can fall.

But you can also use belief to your advantage:

Partly falling under the banner of ‘fake it til you make it’, having the ‘blarney’, as Ovitz puts it, is an Irish phrase meaning he/she has got all the chat. The banter.

Ovitz writes that this is a must for any Hollywood mover and shaker. He argues that while some may see it as faking it, “It’s only blarney if you can’t make it happen”. If you can, then you’re golden.

Probably the best example of Ovitz using the blarney was early in the CAA days when they received a cease and desist letter from a lawyer, stating they needed to shut the company. Rather than complying, Ovitz rang the company and blagged to them about his friends high up at the justice department. If they didn’t rescind the letter in two hours he was going to talk to his pals. He got his way.

One of the key takeaways from the book was the need to understand who you are talking to.

Ovitz wasn’t initially a cinephile so he watched every Oscar-winning movie in the top five categories. This gave him the ability to converse with directors and writers about their craft and influences. He presented himself as one of their own.

Likewise, when Ovitz was plucked by Japanese electronics company, Sony, to help them buy a US studio, he studied Japanese culture. He read key Japanese books and including the Sony founder’s.

Due to this, when his team flew to Tokyo he knew not to push hard in meetings. He was aware that Japanese culture necessitated days of getting to know each other before any ‘real’ business was done.

Finally, in his current role as advisor to the world of silicon valley, he networked and had meetings with founders and engineers, learning what made them tick.

If you wanted to take ‘knowing the territory’ to a new level, Ovitz discusses how he often acted as a ‘chameleon’.

Perhaps one of the more ‘agent-y’ tips from the book, but Ovitz would manufacture the character he needed in each moment or deal. For example:

💰 Remember You in a Creative BUSINESS

One fact that is oft forgotten by creatives in industries like Hollywood is that it is a business. It’s easy to get lost in the art of your project and forget that there are people counting on it to make money, pay bills.

Ovitz worked this to his advantage creating work which was both creative and monetarily successful:

In a business with so much fluff, honesty can cut through the noise.

Ovitz writes that ‘you have to risk alienating your clients’ to do what’s best for them.

In one specific example, he had to ‘diplomatically’ tell Sean Connery he was screwing up his career. He was post James Bond and taking bad project after bad project. Ovitz told him what he needed - the truth. His next film was a hit.

Deals are what make the world go round and Mike Ovitz has certainly had his fair share.

A couple of tricks of the trade:

In a relationships business, it’s not surprising that communication is key. Every phone in the CAA office had ‘communicate’ printed and stuck onto it.

Just look at the four commandments of CAA:

When building a business, creating your own culture is crucial.

At CAA, Ovitz did this by using the writings of Sun Tzu. He focused on a collaborative approach over individualism and bottom up consensus from the Japanese nemawashi concept.

What did this look like? Well, for example, each person at the company was a ‘partner’ all the way from the mail room to the top.

Ovitz believed in the Spartan philosophy. You are only as strong as the fighter on your left.

This culture then filtered out to the clients, who felt welcome and at home.

‘You’d have a meeting with an agent who’d invite you to come down to “meet the crew” at the office. When they then came down the valet would have a photo of you and they’d greet you by name’.

Ovitz was proud of the culture he created at CAA but warned of how it can go wrong, as it did with his later career at Disney.

He writes that in a big company you are defined by the people who report to you and the people you report to. You must careful because you can get stuck in the middle:

‘That’s the tragedy that can befall the company man. We come to believe we are the company’.

Ovitz consistently addresses the notion that ‘Hollywood has always been a ruthless business’.

As opposed to tech, where returns are somewhat unlimited and wealth can be created from nowhere, in Hollywood you are all fighting over the same pile of money to make your product. It is ‘zero sum’ .

While it’s not nice to read for anyone wanting to work in film and television, it’s good to know the world you’re working in and the troubles you may face.

‘There’s nothing sincere in entertainment’.

💪 Know Where the Power Lies

To make a deal and get a project made, you need to get certain people on board and it helps to know who can bring what to the table.

Ovitz teaches that for example, if you want a star for your movie, it’s the directors you need to charm:

‘Directors had stars in their pockets’

But the concept can be applied widely, for example, ‘after 35 you don’t know what’s going on in culture like the kids’, so he’d engage younger groups to help choose what star should be in a movie. He knew that they held the power and knowledge when it came to the next big thing.

🏢 How to Have a Meeting

Mike Ovitz has had a lot of meetings. Here are two magic rules:

Think and then say your answer. Say ‘I’ll look into that’ instead of diving into your reply. It’s best not to be seen as someone who brazenly says things.

‘Make everyone feel comfortable and important’

Pitch with ‘motion and emotion’ is Ovitz’ key takeaway.

Use storytelling and mixed media to create reaction in your audience. For example, when CAA did a presentation to take on the huge Coca-Cola advertising contract, they made little vignette videos of what it could look like to sway the crowd.

- Use understatement, how to sell without selling. He learnt this from David Rockefeller.

- ‘Mystique is 10 times better than publicity’

📖 Who You Know Matters

Famously rule 101 of Hollywood, Ovitz agrees that who you know matters. In fact, ‘that was my first lesson in the business’.

At CAA they used to spent $500,000 a YEAR on gifts for people, tending to relationships. That shows in black and white just how important those bonds were to the company.

Personally, Ovitz wrote around 1000 letters a year congratulating various clients on projects. It was tiring!

Ovitz warns though, that in a business full of favours ‘the chits add up’. Don’t be owing favours to too many people as they’re gonna come knocking all at once.

Taking a leaf from his current ventures, Ovitz believe’s his friends in silicon valley do it best. They cultivate ‘long term relationships’ that will come to fruition further down the line.

Ovitz had has a varied career encompassing success both in Hollywood, business and tech. He attributes part of this to his ability to time the market.

During his Hollywood career he worked on the biggest movies in the world but as he started to see film was drying up compared to TV he decided to get out of the game.

- Be a lifetime learner

- No one has a monopoly on good ideas

- Love what you do

- Turn your weaknesses into strengths - When pitching to acquire Dustin Hoffman as a client, he used the fact he didn’t have lots of clients and years of experience to say that he had more time to devote to Dustan. He signed him.

- Take it til you make it - Ovitz and his partners put their houses down to get the money needed to start CAA. They had to ‘take it til they made it’.

- Push boundaries - Ovitz had the Japanese novel “Shogun” which he wanted to turn into a TV show but no one would greenlight it due to the foreign setting. He fought to get it made and on release was a rip-roaring success.

🤔 What To Learn Next?

I hope this summary of Mike Ovitz's memoir was helpful to you! If you’re interested in learning more about becoming a film and TV agent, check out our podcast interview with Ricky Gervais agent, Duncan Hayes, here.