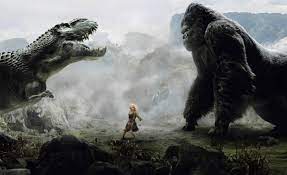 Mike: Hello and welcome to Red Carpet Rookies! My name is Mike Battle, a film production junior working for studios in London. Each episode, I bring you advice and stories from film, tv, and content professionals to help demystify and democratize the industries for juniors and fans alike. Thanks for joining me, let’s get started Today’s guest is Oscar winning production designer GrantMajor. With career beginning in New Zealand on films such as PeterJackson’s Heavenly Creatures and Jane Champion’s An Angel at My Table. Grant gained wider recognition after being the man behind the unforgettable sets of the Lord of The Rings Trilogy as well as King Kong, X-MenApocalypse, and recently, the live action remake of Disney’s Mulan. Grant joins un now from New Zealand, how are you getting on?

Mike: Lovely, I’d like to start in the beginning, with what did you parents to and did it affect your career aspirations growing up in New Zealand?

Grant: Um, well look having spent a whole life doing the arts and creative things, my parents didn’t do that at all. I’m pretty old now, I’m 65, so way back then when they affected my life a lot more my dad was a banker andmy mum was a secretary. They were both fairly artistic people In their own sort of amateur ways. My dad was a very hands on, he fought in the second world war, learned a lot as an engineer. Used to make all of our birthday presents andChristmas presents for the whole family. So, he used to make all that stuff. My mom, before this big consumer thing that were in literally, they used to make our clothes, knit our jerseys, be hands on sort of crafts people and I can’t help thinking that that had a pretty mental influence on my life in some ways. I still have these hand drawn illustrations that they did in their spare time around the fireplace. Listening to the radio you know before TV days. So, they were artists in their own way but I was particularly fortunate to be able to make a living out of it and make a career out of the arts. I really value that heritage really, even though they didn’t encourage me to go to arts school in facts I think they were a little suspicious of it.

Mike : Yeah, you mentioned art school, and I know that you initially trained in graphics. Back when you were doing that, did you have dreams of the film industry.

Grant : No not at all actually, interesting that New Zealand was probably half the size population size, then what it is now, literally 50%smaller. We didn’t have a film industry we didn’t it was like an alien concept in many ways. This can be a little ingenious, probably when I was in art school, they were making 1-2 films. But it was not an industry as much as a sort of boutique on off kind of thing. So, I didn’t aspire to come into the film industry. I was encouraged to find an artistic career than would find me money. So, I studies graphics which was a pretty well established thing back then. I was only laterally that I stumbled across this idea that you could make a living in this live performance sort of thing. Yeah, I did really well in graphics and I do carry a lot of skills with me now. They were very valuable, especially in the early part of my career.

Mike: Was it graphics that took you into work at the BBC inEngland, or was that another pursuit?

Grant: No no, in between things interestingly back then when you were at art school when I was at art school. They guaranteed you a job after graduation. At the end of your exhibition there were people that were looking for people with our skills. Particularly in the advertising industry. I was never that alarmed by the thought of entering into the advertising industry. I did accept one with the local TV station. Tv South Pacific television which has now been amalgamated into a main sort of TV thing here. So, I went straight from doing graphics which is essentially a 2d discipline into a 3D world of doing sets. I really flourished during that,I really loved it. I did aspire of going from my graphic arts school into doing fine arts. I took on this job at TV to, it was a gap year in a way. To be able to go and do fine art. But I never went and did the fine art. I just stayed with set design, I was an assistant set designer at this TV station. But of course, in the scale of things, I was sort of thrown in the deep end really, within three months I was designing a movie way down the bottom of the south island, a shipwreck and with model photography, location filming, and studio sets. Here I was several months out of art school.

Mike: Do you think throwing people into the deep end is a good way to manage the department general, would you do that with your juniors now?

Grant: Yes, and no I mean I do value a lot that sort of responsibility that was given to me very early on. That’s not to say I couldn’t do the job well, I was mentored by the senior people in the department. It was a little bit of both, New Zealand is a relatively small country. We don’t have a structured sort of thing like you have inEngland where there’s a lot of people competing for the same jobs. You have todo this little work before you can go onto the next level, and the next level and the next level. So you just sort of have to leap frog a lot of those intermediary sort of things. Which is good in one sense and bad in another because you don’t get the sense of doing these intermediary things. So, and that sort of affected my career. I was getting a lot of responsibilities young, at least I considered it to be so. And, just learning on the job, you learn by your mistakes as much as your successes.

Mike: To go back to the theatre thing you were talking about, I find it interesting that you were a young Keely in London at the time. What was it like dealing with some of the old theatre dwellers, and learning your craft there?

Grant: It was the most incredible experience, you know I say that Idid pretty well in my New Zealand TV things, but nothing compare to the BBC which was fundamental it was like my apprenticeship, I like to say it was my apprentice ship, really. I went back to the beginning again, restarted. They actually taught me how to draft sets properly. Because the drafting process there, I went in as a holiday drafting designer and they taught me how to draft properly. I mean, I had learned drafting when I was in secondary school, so I could do it. But, the BBC the drafted set plans are like contracts. When they send these drawings out to construction companies and stuff like that, they have legal ramifications to them. So there’s a formality to the way these drafts were designed and a good learning curve for me. I just spent, because I was on my own in England, I didn’t know anyone over there, I just spent all of my time at work. Every moment of my life was really to do with concentrating on learning how to do this. It was a really great way to do that, and along with that there was like a 100 people in the design department at the BBC. Which was huge for me. Not all designers, the bulk of them were designers, and assistants what have you. But it was set decorators, prop people, and there was the design department library which had researchers and all that sort of stuff. So, I ended up specializing in period drama which there was a lot of back in the early nineties. So I would go to the library and get are search or two on a particular place and time period was pretty new for me. That depth and that scale that brilliance of people. There’s a lot of brilliant people as well who are like the primo production designers now. A lot of them started in the BBC.

Mike: And then how was it that you moved from that into doing some smaller shows in New Zealand, for example an Angel at My Table?

Grant: So rather being excellent in design, I ended up being in NewZealand. At that time, a lot of my friends had swayed into film, so all of a sudden, now there’s this vision in sort of film business that was sort of on the back of the tax bracket actually. It was sort of a wild whist sort of era the1980’s in New Zealand. We did make films, and they were a lot of fun, again a learning curve for me because I was able to step from being an assistant set designer at the BBC to being an art director. In new Zealand we call it a standby art director, and then supervising art director, and then by the time anAngel at my Table came along, it was my first production design feature film Iever did. You know, so I sort of worked myself through the New Zealand system, rather than working at the BBC. I was also doing things that were not film related. I was doing the New Zealand pavilion for Australia and in Spain I design the open and closing ceremonies for the commonwealth games in NewZealand. Sort of tourist destinations as well, I was sort of doing film and other stuff you could say.